Fixed ball valves are mainly used in high-pressure and large-diameter ball valves. In addition, the transfer of support force and medium force from the valve seat seal to the valve stem, support sleeve or support plate will greatly reduce the torque required to operate the valve.

With the correct selection of sealing elements, this form of ball valve also guarantees complete sealing in both directions.

The reliability of the ball valve operation depends to a large extent on the ratio of the average diameter dcp of the seat sealing surface to the sleeve diameter D1. If the D1 value is not large enough compared with the dcp value, the ball valve will not be able to ensure reliable sealing. Conversely, an excessively large D1 will cause overloading of the seal seat and seal ring, thereby increasing the torque required to turn the valve.

The advantages of this ball valve are: (1) When closed, the packing and most of the valve body are not subject to internal pressure. (2) When closed, no fluid accumulation area is formed on the pressurized side. This feature is especially important for systems that work with corrosive and cryogenic liquids.

The disadvantage of this kind of ball valve is that the torque required when the ball rotates is large. In addition, the load on the fixed bearing increases due to the increase in the effective area for the pressure to act.

2. Double seat bi-directional sealing seat. As shown in the figure below, the basic feature of this ball valve closure is that the sealing is achieved by the rear valve seat of the ball installed in the direction of medium movement when it is closed. This structure can reduce the load on the support bearing of the ball.

Compared with a one-way or two-way seal, the structural difference is that it has a floating sleeve, and the seal diameter D2 on the sleeve is smaller than the average diameter dcp of the valve seat. In order to ensure this condition, the inner diameter of the valve seat should be larger than the diameter d of the through hole of the sphere.

The ball valve with double seat and bi-directional sealing has the following advantages: (1) The load on the fixed shaft is greatly reduced; (2) The total friction torque in the ball valve is reduced.

The disadvantage of this kind of ball valve is that in order to ensure D2<dcp, its channel section must be reduced. In addition, when the ball valve is in the closed state, the packing and the inner cavity of the valve body are under the action of the working medium pressure. 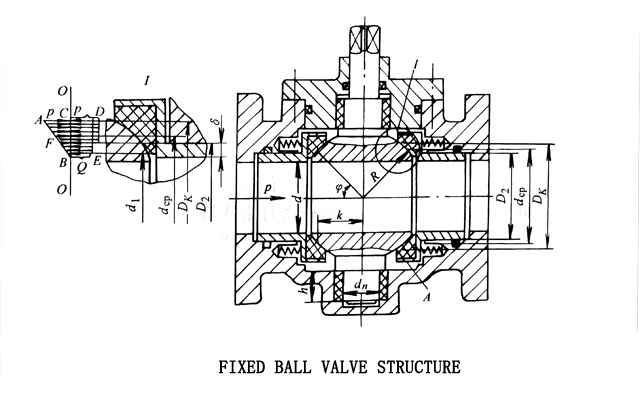